A brief history of the hydraulic cylinder 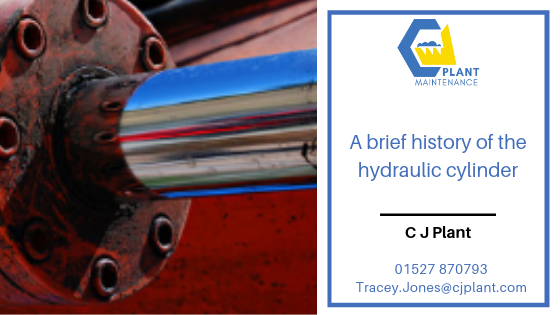 A brief history of the Hydraulic Cylinder

Hydraulic engineering and science have been a major force in the advancement of science, our understanding of technology and our own ability to change how we live and what we can achieve since the 1600s right up until the present day. As specialists in hydraulic repairs, we wanted to share with you the key figures and interesting history behind hydraulics!

The history of the hydraulic cylinder starts in 17th century France with a Frenchmen called Blaise Pascal (1623-1662). Pascal had many interests including, mathematics, physics and philosophy. His most important legacy is that of the hydrodynamic advancements he was responsible for. These advancements in science include the law that bears his name, Pascal’s law. This law was the result of Pascal’s scientific experiments and the breakthrough he made was to ultimately realise that a confined fluid put under equal pressure from all sides produces energy and this energy could be used as a power source. This realisation was to transform understanding of hydraulics and the capabilities and possibilities that were now within reach. Indeed, this discovery paved the way for machines such as the hydraulic printing press, and the syringe, both major advancements for the time and still very influential today.

However, it wasn’t for another century that Pascal’s discovery was able to be brought to masses with the help of British carpenter and engineer Joseph Bramah (1748-1814), who, living in the 18th century was able to bring Pascal’s discovery and its implications to people across Britain and the world. He was able to do this using hydraulic engineering to design and build a new type of lock called the challenge lock, made with new tools and techniques mastered with hydraulic science and engineering. This made Bramah famous, but what made him even more so, was to take the hydraulic cylinder and mass produce it, something that Pascal had been unable to do 100 years before. This rollout of the printing press would bring the hydraulic age to millions of people every day in their newspapers and other printed text and did so for decades. Sealing Bramah’s name as an engineering icon with the advancement and distribution of hydraulic science as his legacy.

In the 19th century is was the turn of William Armstrong (1810-1900) to push the boundaries of hydraulics and he did. He discovered how water that would otherwise go to waste or not be used very efficiently could be used to power cranes. His reorganisation of water usage for hydraulic machinery was to transform his hometown of Newcastle where his new hydraulic cranes were such a hit that they were quickly mass-produced to have a large role in the Victorian industrial era. His uses of hydraulic engineering were able to transform our understanding of hydraulics in the modern era with his invention of the hydraulic accumulator that remains a key part of hydraulic engineering. With his discoveries, interventions and inventions, Armstrong becomes a major figure of the period and was responsible for some of the most revolutionary developments of the century and of scientific engineering with hydraulics.

Finally, in the 20th century, the most recent advancement in hydraulic technology was an American man called Harry Vickers (1898-1977). His innovations and advancements of hydraulic engineering included the balanced vane and pump. This pump would allow for the power of hydraulic energy to move into a new field of possibilities that hydraulics still benefit from and rely on today.

Over the course of the last century, it has become increasingly clear that water was not the best liquid to use for hydraulic machinery and equipment. Indeed oil is the most effective provided it is non-corrosive. Further, oil was also a better choice than water because it was denser, could hold more weight, is resistant to evaporation unlike water, and remains cooler under the high temperatures of hydraulic machinery. Moreover, hydraulic machinery is a very safe option for those working on it, making it even more effective and efficient for the modern era in the 21st century.  As hydraulic engineering has advanced for liquids it has also made great strides with the cylinders used in hydraulics. Every aspect of the cylinders has changed and been improved over the past decades, these include the manufacturing materials, how the cylinders are used, how they are designed, how they are set up and operate, and how they are placed. Furthermore, the uses of cylinders have also come along way in recent decades with advancements into drilling, mining, manufacturing, building high rise buildings, and aviation. Modern hydraulic power is as much as ten times more power than electric power. Which stands to show that although hydraulics is a centuries-old technology, it is still as relevant and influential as it was in the 18th and 19th centuries as it is in the 20th and 21st. With new and ever more impressive advancements in the hydraulic engineering sector, it is clear that the future of hydraulics is strong, resilient and able to evolve and progress over centuries. and it will probably continue to do so for many decades to come.

We use cookies to ensure that we give you the best experience on our website. If you continue to use this site we will assume that you are happy with it.Ok